Looking for something or other on the interweb’s about my newly acquired obsession the GS1000G; I stumbled onto this fellas site. I was instantly engaged by what he had to say. This guy obviously gets this whole bike thing. Not just the machine aspect but what it means to put miles on and be dependent on each other. I dig it and I plan to check out the rest of what he says.  Check him out here

Here are some gems I had to share as I dug through the site. I love this guy.

It was a hell of a thing to deal with; the relationship between bike and rider, when they have put in that many years and miles together, becomes almost symbiotic, so that it goes beyond the loss of a possession or even a friend. A piece of me went up in that fire…and these pictures and these memories are all that’s left.

While I topped up the tank with Pemex Extra, a flashily-dressed woman, broad of hip and big of tit and sporting a spectacular head of dyed-red hair, came over and wanted to know if I was all right. She spoke good though heavily accented English, and she seemed genuinely solicitous; she warned me to be careful, there were “crazy fockers” driving these roads. She was very obviously a whore, but, judging by the car she drove off in, she must have been a pretty successful one.

Shinya Kimura of Chabott engineering talks getting started and his roots of the 2 wheeled life.

As my obsession for all things 2 wheels hits it’s peak I have stumbled onto a KZ1000 and thus become enamoured with all things Kawasaki KZ. What a culture that was built around these bikes. I watched “On any Sunday 2” and in it the narrator comments about a piano maker making motorcycles. If only he know what that piano maker was about to set off. 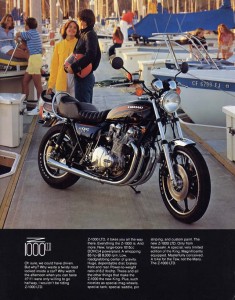 A guy I know had mentioned that he had KZ and was looking for someone who would most likely get a deal on it. I followed up a few weeks later and he said $300 and I could take it. The bike was dirty from sitting but I saw potential. I had originally intended to clean it up and get it on the road as soon as possible to have a bike to ride while I finish up the FXR project.